The first of four flats has been fully assembled and has received a coat of primer.  From above I sprayed gray to provide a good base for weathering the deck boards, while the underbody and sides (and trucks) received my favorite freight car base, Dark Walnut.  This rattle-can paint is nearly black with just a hint of brown, like the really good extra dark chocolate I eat.  Makes a nice starting place for a dirty black coated in road dirt and wheel spatter and all the accumulated crud picked up in service. 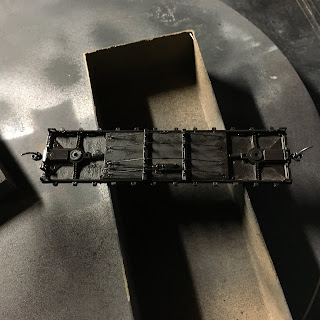 It may be hard to see in this shot, but I've added two things to the underbody beyond what the kit calls for.  First, I used the metal remnants cut from the detail castings plus some other metal sprue I'd kept just for occasions like this, to add some weight.  Not much, but every fraction adds up.  Secondly I added one wire from the K brake valve to simulate the rod leading to the brake wheel and ratchet.  I thought about adding brake levers and other rods, but decided it looked busy enough as is.
By the way, I haven't abandoned the Suydam Ice Factory kit entirely.  My attention has been on painting minis for my Star Wars Legion core set (one unit of troopers complete, another unit of rebels nearly there!) as well as starting a Binkley shorty baggage car, and a variety of other household tasks.  With so many aspects of life being externally influenced right now, I need my hobby to be flexible enough to accommodate my whims and shifting interests.  And it does.

Posted by Galen Gallimore at 1:52 PM